BY RACHEL E. GREENSPAN (VIA INSIDER) 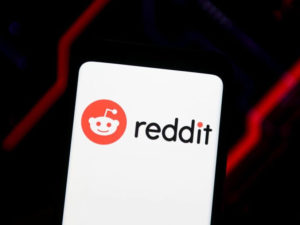 The Reddit logo, featuring a smiling alien with a single antennae on his head, is seen displayed on a smartphone screen. [Mateusz Slodkowski/SOPA Images/LightRocket via Getty Images]

Samuel Proulx, a 32-year-old blind man living in Ottawa, Ontario, isn’t that interested in using traditional social media. Proulx doesn’t find Instagram and Facebook pictures of relatives’ and friends’ babies that exciting — but even if he felt differently, those images are usually inaccessible to him.

“I love my extended family, but that content is of significantly less value to me,” Proulx told Insider. Instead of spending time on Facebook or Instagram, Proulx prefers Reddit, a text-based, rather than image-centric, platform that offers him a community of strangers to interact with, and a community of users from all over the world who live with blindness or visual impairments.

On Reddit, Proulx has been an active user for a decade, where he has participated in different subreddits. Now, he spends most of his Reddit time moderating r/Blind, the main community for the blind and visually impaired on the platform. Because of Reddit’s design, which encourages users to talk to each other in various interest groups, it’s become Proulx’s favorite platform.

“I think there’s something culturally different about the space on Reddit,” he said, comparing it to other social platforms.

Beyond r/Blind, the r/TranscribersOfReddit subreddit is also popular among blind users. On the transcribers subreddit, people write image descriptions for inaccessible pictures posted on the platform.

Data provided by Reddit indicates that the r/Blind subreddit has seen massive growth in the last few years. Activity on r/Blind more than doubled between 2018 and 2019, and activity on r/TranscribersofReddit few more than 68 percent, according to the company.

Reddit is not necessarily the most accessible platform, but its format is inherently easy to understand

Image accessibility is one of the main hurdles for blind and visually impaired people online, as image-based platforms, particularly Instagram, can be very difficult to access, as reported by TIME in January.

Reddit has no alternate text (alt text) capabilities, meaning users can’t provide an image description that the visually impaired community can use to identify pictures.

Facebook and Twitter, however, do have alt-text features, but each of those platforms’ alternate text programs function quite differently. On Twitter, users have to find the “ALT” tab when posting an image, choose to click it, and type out their own description. Facebook offers automated alt text, but users who spoke to Insider say the artificial intelligence isn’t as good as it could be. The AI will generate context for the image, describing various objects or backgrounds, but it won’t be nearly as descriptive as alt text written by humans…

Read the full story about Reddit at article source here.