This Blind Gamer Is Fighting for Accessibility in Video Games

BY GRAHAM ISADOR (VIA VICE) 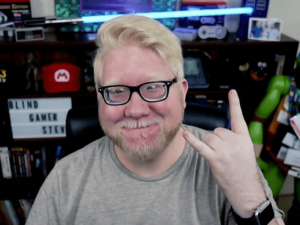 Steve Saylor’s YouTube channel is devoted to reviews, reactions, and first impressions of video games. Saylor has an infectious, over-the-top, energy while hitting on many familiar Youtube tropes. He’s prone to hyperbole, funny faces, and the occasional silly voice. Popular clips see him web slinging as Spiderman or digging at the ground in Minecraft. But the biggest thing that differentiates Saylor’s videos from other gaming channels, is that he’s a blind gamer.

“When I started I thought being blind was just my niche differentiating myself from other gaming channels,” said Saylor. “At first my channel was just about how I sucked at video games. That was the comedy of it….but in 2017 I was invited to a conference by Ubisoft. I was on a panel with other people talking about their experiences. And I came to this realization. It wasn’t that I sucked at games, it was that games sucked for me.”

With his Blind Gamer channel Saylor gives viewers an entertaining and educational look into the world of visual impairment. The host uses video games as a jumping off point for asking bigger questions about the way society talks about disability and ableism as a whole. For instance: Why has easy mode been called a consolation prize in the gaming community? Who gets to participate in the gaming community at all? What are the steps mainstream game developers can take to make their work more accessible?

Basic settings like captioning, font size, and audio description can be extremely helpful for visually impaired gamers while playing, but are often overlooked by developers. For Saylor those settings can mean the difference between an enjoyable experience and a frustrating one. For example: In a recent accessibility review of Gears Tactics he praised the developers for adding a colour blind mode and a “let the game read to me” feature. Comparatively the bare bones accessibility features of Doom Eternal lead to disappointment. He hopes that being vocal about his experiences online will help creators be more conscious of all the types of people interacting with their work.

“Growing up when people were making consoles and games no one was thinking about disability because it wasn’t at the forefront. I’m not knocking any developers for that. They probably didn’t know anyone or have a disability themselves. But when we see the growing community of disabled people online who want to be able to play the same games their friends are playing, it can have an influence. The louder our voices become the more people start paying attention.”