How Tablet Games Can Teach Skills to Students with Visual Impairments

BY WADE TYLER MILLWARD (Via EdSurge)

Marty Schultz has added a twist to hangman, the classic word-guessing game. His tablet-run version of the game has the same goal: pick letters to figure out a mystery word. But to pick a letter, you run your finger over a paper Braille sheet on top of the screen.

The tablet reads out each letter, building your association between the raised dots and the alphabet. You tap twice once you’ve settled on a letter, and the tablet tells you how many times the letter appears in the mystery word. 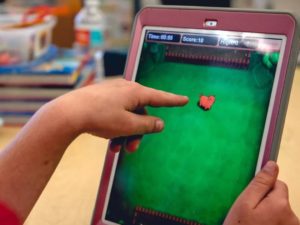 A student plays the “Barnyard” game by ObjectiveEd on their tablet which helps students who are blind or low vision learn directions and orientation. [Courtesy Photo / ObjectiveEd]

“We’ve now taken the boring task of learning Braille and turned it into a game,” says Schultz, co-founder of Boston-based educational games maker ObjectiveEd. “We’re changing the dynamic so that a kid is looking forward to learning.”

Schultz has taken a career in building special needs software and games for people who are blind or have low vision into ObjectiveEd, a new endeavor at a time when investor interest in educational tools and investor interest in assistive technology are apparently on the rise.

Schultz isn’t a stranger to technology for people with impairments. He co-founded eSped, a K-12 software suite to help districts serve special-needs students, which sold to Frontline Education in 2016, and has operated Blindfold Games since 2013 to offer accessible games to adults with visual impairments.

Blindfold offers a library of 80 games including puzzles, slots and adaptations of mainstream titles like “Candy Crush” and game shows like “Jeopardy.” The company says they have been downloaded over 500,000 times by 25,000 users.

But even with all his experience, Schultz believes assistive technology has historically been a tough sell to venture capital due to the small number of potential customers and a likelihood that customers can’t afford the expensive technology. According to the American Foundation for the Blind, about 568,000 children in the U.S. have vision difficulty and about 26.9 million American adults have experienced vision loss. About 10 million of them have a family income of less than $35,000.

One of the places piloting Schultz’s technology this year is The Carroll Center for the Blind, a nonprofit based in Newton, Mass.

Charles Warren, an orientation and mobility specialist there, says he was impressed by how engaged the group of 15 students were when Schultz demonstrated games like “Barnyard,” where children use a finger to drag an animal in a called out direction, like “downward” or “north.” He says the blending of education and entertainment is unusual in the world of assistive technology, and the kids enjoyed them. “You can’t trick kids,” he says. “They’re either into it or not.”

Read more about “How Tablet Games Can Teach Skills to Students with Visual Impairments” at article source here.