Memes Still Aren’t Accessible to People Who Are Blind. What’s Being Done About It?

BY RACHEL E. GREENSPAN (VIA TIME) 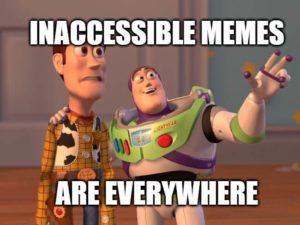 A meme featuring two characters from Toy Story. With his arm around a terrified Woody, Buzz Lightyear points off in the distance. Text reads, “Inaccessible memes are everywhere.”

If you’ve spent a lot of time on the internet in the last decade, you might immediately recognize this description: a toddler clenches his fist in front of a determined-looking face.

“Success kid” is one of the most popular online memes in history. But for the 2.2 billion people worldwide who report visual impairments or blindness, according to the World Health Organization, it is just one of thousands of images on the internet that are essentially illegible to anyone without full vision.

As millions like and re-share a viral post, people with visual impairments often find themselves locked out of the discourse. “It’s frustrating,” says Alex Stine, an 18-year-old recent graduate of the Kentucky School for the Blind who works in website accessibility. “When [I] come across [a meme], my screen reader reads ‘graphic.’”

Experts who spoke with TIME say there’s much more to be done to make memes universally enjoyable.

The most common practice for making images accessible online is through alternate text, better known as alt-text, which are descriptions embedded within a picture file. Screen readers, software applications that translate what’s happening onscreen into braille or audio, can recognize a picture’s alt-text and read it back for the user.

That would work for screen reading software. But consider what happens when things get meme-d: like this meme, with the photo next to a screen grab of a scene from the TV show Friends, showing Monica (Courteney Cox) opening the apartment door to find Rachel (Aniston) and Ross (David Schwimmer) in the hallway, with closed captions showing Monica’s line: “I’m sorry, apparently I opened the door to the past.”

Read the full story about the inaccessibility of memes at article source here.