BY DANA JACOBSON (VIA CBS NEWS) 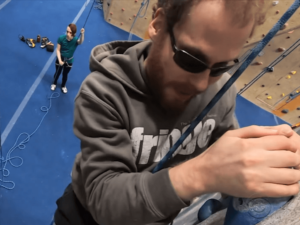 An aerial view from above Matthew Shifrin as he scales a rock climbing wall at an indoor climbing gym.

BOSTON (CBS) – A 22-year-old blind entrepreneur is working to make rock climbing more accessible to the visually impaired. For its “Pushing The Limits” series, CBS This Morning profiled Matthew Shifrin and his innovative Lego system at a Central Rock Gym location outside Boston.

Shifrin was born without sight. At just 13 years old he started coming up with directions in Braille for Lego sets. With this new system for rock climbers, a caller on the ground mocks up the wall using different Lego pieces to represent footholds. The climber then uses their fingers to map out the path in their mind.

“Everyone deserves the thrill of doing something they never thought was possible,” Shifrin said.

He’s hoping the Lego system can be used at the Paralympics and be adapted for other sports like skiing.