The Lego Foundation has created both audio and braille instructions to build their Lego blocks for people who are blind or visually impaired.

Matthew Shifrin first discovered Legos when he thrust his hands deep inside a crate crammed full of the tiny brick toys.

His babysitter, Lilya Finkel, had spotted the discarded box on the side of the road and helped Shifrin, who is blind, haul it inside the car. She believed he would learn to enjoy them just as much as sighted children did. Shifrin, who was 5 at the time, said the thrilling crate launched a lifelong devotion. 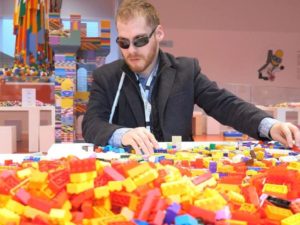 Matthew Shifrin has been working tirelessly for several years to spread audio and Braille Lego building instructions to children around the world. (Photo Courtesy/The Lego Foundation)

“I loved the creativity of Lego,” said Shifrin, now 22, whose parents guided him through builds for most of his childhood in Massachusetts. “Plus, it was wonderful brain training for me: Blind people have trouble with spatial reason and spatial awareness, and Lego lets you go piece by piece to put a room together.”

The Lego-stuffed crate did something else for Shifrin, too: It set him on a mission to make Lego play accessible to vision-impaired children around the globe. His years-long dedication paid off Wednesday when the Lego company debuted its first audio and Braille building instructions, a project completed with Shifrin’s input — and because of his persistence.

The instructions, available free online, come in English and detail how to put together four different toy sets: Lego Classic, Lego City, Lego Friends and Lego Movie 2. Customers simply go to Lego’s new website and choose either audio or Braille. The Braille guidelines can then be translated by a “Braille reader,” a device that converts on-screen computer text to raised Braille characters.

“This was always something we wanted to address: How do we make Lego for visually impaired and blind children?” said Fenella Blaize Charity, Lego’s creative director. “We want the Lego experience out to as many kids as possible.”

Lego will test the instructions over the next several months and gather feedback from vision-impaired users. At the end of the year, the company will reassess, fix any bugs and — if all goes well — eventually develop audio and Braille instructions for every Lego set it sells, Charity said. It will also translate the instructions into more languages.

The project — at a cost Lego declined to disclose — is being funded by the Lego Foundation, a division of the Denmark-based company that focuses on empowering and educating children through play. It’s the culmination of months of work by Lego employees, who partnered with staffers at the Austrian Research Institute for Artificial Intelligence and Shifrin himself. Lego began exploring the idea after Shifrin reached out roughly two years ago.

The challenge the team faced was “pretty massive,” Charity said. Lego is an “extremely visual” form of play, she said, given that the entire experience centers on seeing what you’re building.