In Brazil, Burger King takes steps toward inclusion airing ad with audio description that features a customer who is blind.

BY MITCH REAMES (Via ADWEEK)

The goal of many food commercials is to trigger physical sensations like taste and smell by using the association of sight and sound. Making people feel moved by the faux-burgers they see on the screen so they swing through a drive-through next time they are out is a tried-and-true technique. 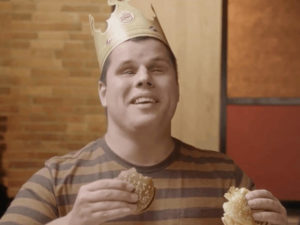 His descriptions bring the burgers to life as he calls the double cheddar a “cheddar explosion” and describes the buns as “soft sesame bread.” Additionally, the 30-second spot allows Eduardo’s personality to shine, including a couple of lines that may turn some heads.Arguably the most important part of this ad is the beginning.

The audio description at the beginning sets the scene for visually-impaired viewers. This is a permanent service on Secondary Audio Programming, or SAP, which helps people get an idea of the visual cues happening during a show. For this ad, BK instead opts to make the audio description a primary feature. Additionally, captions throughout the ad are in place to help those with hearing issues.

In the United States, audio scene-setting is handled by Descriptive Video Services, which is also the common term for the technique.

‘[The campaign] shifts your perspective on people with visual disabilities, and we hope this does the same with our audience,’ said Rafael Donato, David SP’s creative vp.