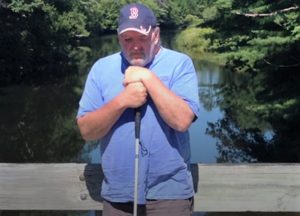 Deon Lyons lost his left eye when he was just 5 months old to retinoblastoma, a rare form of retinal cancer. Radiation used to treat his right eye when he was a child cost Lyons his sight, starting in 2010, and a series of strokes left him completely blind by 2016. Now, he’s battling cancer throughout his body. Photo courtesy of the Lyons family. (c) Pine Tree Watch.

Digging through adversity to the opportunities beyond

Deon Lyons has cancer. It’s advanced and the outlook is anything but cheery. But he’s not letting that get him down. His attitude is not surprising given one of his favorite words is “opportunity.”

“Opportunity” is a much better way of looking at what life has handed you then, say, “challenging,” which is the word most people would use to describe what he has faced over the course of his life.

In late summer 1960, Deon was the fourth child born to his parents in Lubec. He was born with retinoblastoma, a rare form of retinal cancer commonly affecting children under age 5. Today, depending on what part of the world you live in, the prognosis is good – 9 out of 10 children live into adulthood. But in the early 1960s, treatment for eye cancer wasn’t as developed as it is today.

The Lyons’ doctor in Bangor, though, had heard of a new radiation treatment which was just making its way into U.S. medical centers. The treatment wasn’t available in Maine, let alone the tiny coastal community of Lubec, but it was in New York City.

‘No matter what you do or where you go, no matter whether it’s good or bad, there’s always an opportunity in there somewhere,’ he says. ‘Sometimes it’s right on the surface. Sometimes you got to go and dig it out.’

So, at just 5 months old, Deon traveled with his mother by train to what was then called Columbia-Presbyterian Medical Center (now NewYork-Presbyterian/Columbia University Medical Center). His medical team had to remove his left eye, which cancer had already destroyed, but was able to save his right eye by using radiation.

The radiation caused some facial disfigurement. Beginning at 17, Deon had numerous cranial-facial reconstructive surgeries in Boston, but otherwise, he lived a “normal” life.