After Losing Her Sight, Legislator Works to Open Center for The Blind in Uganda 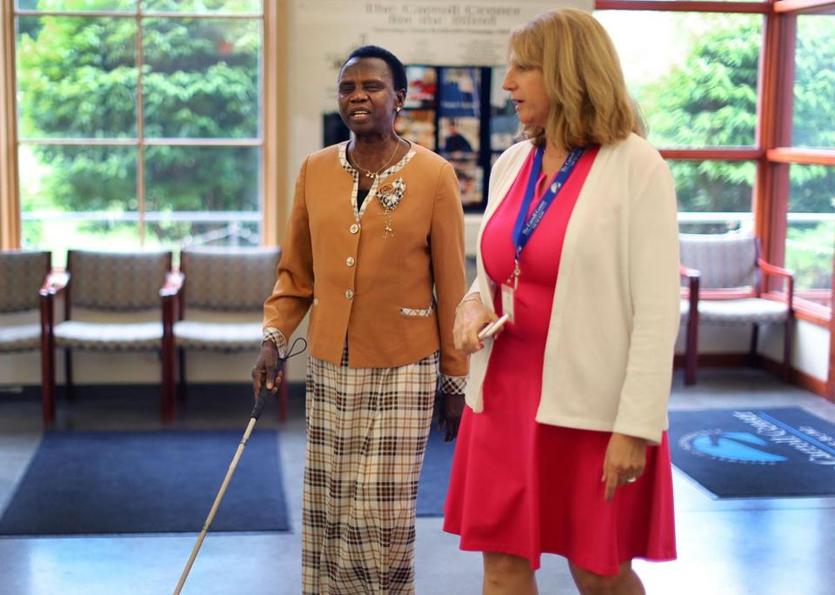 JOHN TLUMACKI/GLOBE STAFF Margaret Baba Diri walked in the lobby of the Carroll Center for the Blind in Newton with Dina Rosenbaum (right), chief program officer for the center.

BY EMILY WILLIAMS (VIA THE BOSTON GLOBE)

Margaret Baba Diri is scrolling through her iPhone, even if it doesn’t seem that way at first.

The screen is dark, and she holds it at her chest, her finger swiping through the pages as an automated voice calls out the names of her apps until she lands on the one she wants.

She is practicing “flicking,” a technique she learned during an eight-week training program this spring at the Carroll Center for the Blind in Newton.

A member of the Ugandan Parliament for more than 20 years, Baba Diri, 64, came to the center to improve her skills and move closer to her goal of opening a center for the blind and visually impaired in Uganda.

She hopes to model many aspects of the Carroll Center’s program, she said, especially the close relationship instructors build with students.

“We’re not here for competition,” she said. “We are all growing at our own pace.”

Baba Diri has a gentle, natural smile — the kind that tells you she doesn’t smile just to be polite. She smiles most when she talks about things that bring her joy, like her woodworking classes at the Carroll Center, or her daughter, Susan, who works as her guide, or the land she has set aside in her home district of Koboko for a center for the blind.

The Ugandan Parliament sponsored Baba Diri’s visit, as it did when she completed a shorter computer training course at the center last May.

Over time, Baba Diri has developed many ways to compensate for her lack of sight and work independently. She reads braille and, with the use of a special machine, can record, edit, and print notes in braille.

Over the past several weeks, through the center’s independent living program, Baba Diri practiced a range of everyday tasks, such as crossing streets, washing clothes, and cooking meals.

Some parts of the program didn’t match up with her life in Uganda, where she doesn’t have a washing machine, oven, or a reliable Internet connection.

So, some lessons were adjusted. Instead of practicing how to prepare food in the microwave or the oven, she focused on chopping vegetables and cooking on a stove top.

As she learns, she is taking careful note of how those skills are taught and envisioning how she’ll construct her own programs.

“Her stay is as much about seeing how we teach as it is for her own benefit,” said Brian Charlson, the Carroll Center’s director of technology, who has been teaching Baba Diri how to use her iPhone.

Charlson is blind, as are about 20 percent of instructors at the center.

One of the greatest benefits the center provides, Baba Diri said, is the sense of community that comes from being surrounded by people — students and instructors alike — who are facing the same challenges.

When she’s working in Uganda, she said, her name is preceded by “the honorable.” At the Carroll Center, she’s just Margaret.

Baba Diri said she has been most fascinated by her woodworking courses. It’s something she never imagined doing, she said, sighted or blind. But by carefully feeling the contours of the wood, she has learned to drill holes and build boxes.

“We can feel and imagine what other people can see,” she said.

Baba Diri lost her sight in 1990 from glaucoma. She had been teaching biology and chemistry at a secondary school for 14 years, and when she lost her sight, she also lost her ability to teach.

“I thought it was the end of my life,” she said.

But a friend reminded her that the loss of her sight didn’t diminish her intellect. She could learn braille, practice mobility training, and find a new career.

At the time, there was little advocacy in the Ugandan Parliament for people with disabilities, she said. So, she joined a new organization, the National Union of Disabled Persons of Uganda, and helped lobby for them to receive five new seats in Parliament. She was tapped to fill one of them.

After serving two terms, she decided to leave the designated seat and run to represent her entire district. She won, and is now serving her third term.

When Baba Diri was first elected to the seat, there were only 36 primary schools in her district, she said. Now, there are 68. She also helped to open two school annexes for blind students, where they can learn braille and mobility skills.

Still, those facilities don’t have the equipment they need, Baba Diri said. And although more students with disabilities are attending secondary schools and universities, they often face limited employment opportunities after graduation.

When Baba Diri returns to Uganda at month’s end, she plans to rededicate herself to her dream of opening her own center for the blind. She will also work to advance a slate of public works projects, including efforts to provide better access to water and electricity in the district.

Baba Diri will continue pursuing projects until at least 2021, when her term in Parliament ends.

“After that, it depends on what my people say,” she said. “I will not give up until they say no.”