Why & How Innovation for the Visually Impaired is Big in Boston 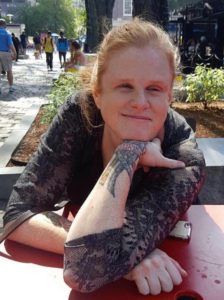 Like almost any smartphone user, Sassy Outwater rarely puts her phone down. From editing documents to shopping online, from buying her groceries to keeping track of her health records, she relies on her iPhone X to manage the majority of her daily life tasks.

“I use it for a lot of the same things you do, but with an added layer,” she said.

Sassy has been totally blind since age three, so the concept of smartphone addiction doesn’t really apply to her. She thinks that a visually impaired person who’s using a smartphone should not be disturbed, a rule that she has enforced since taking over as director of the Massachusetts Association for the Blind and Visually Impaired in September 2017.

Via Bluetooth, Outwater connects her smartphone to a Braille display, which is produced by a company named Baum USA. She uses an app called Voice Dream, which reads out loud her emails or her friends’ Facebook posts. She likes Sunu, a startup developing a bracelet that can give blind people directions. One of her favorite companies is Open Style Lab, which designs clothes for people with disabilities, including clothing that helps the wearer identify its color.

Voice Dream, Sunu and Open Style Lab are all local companies that are developing technology for the blind or visually impaired community. Baum USA had an office in Methuen, Mass., before shutting down its U.S. operations in February 2018. In many cases, companies have been founded in the greater Boston area and still operating out of Massachusetts, or are born in Massachusetts before moving elsewhere.

There’s no denying that innovation for the blind community is big in the greater Boston area.