‘To feel the wind’: Blind sailors take the helm in Boston Harbor

Limits were made for breaking – just ask sailors with vision loss. “There is a stereotype that if you’re blind, you can’t do anything,” says Katherine Kern, who has raced in world championships.

BY NOAH ROBERTSON (VIA THE CHRISTIAN SCIENCE MONITOR) 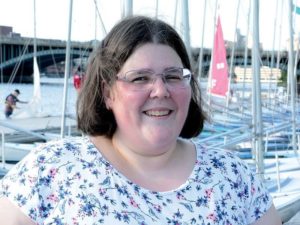 Katherine Kern, who first learned to sail in the SailBlind program, smiles on a dock in front of a row of sailboats. [Noah Robertston/The Christian Science Monitor]

Working on a master’s degree, Katherine Kern can’t make as many Saturday sails as she would like anymore. But on the last day of the summer season, she makes sure to arrive at the pier by 10 a.m. She’s set to cruise through Boston Harbor with Jan Lindquist and Peter Fay – her crew for the day.

It’s cloudless and warm with an impulsive wind. Mr. Fay holds the tiller while Ms. Kern and Mr. Lindquist trim the sails. They tack, they jibe; sailing a Rhodes 19, they look like everyone else on the water. They like it that way, too.

Ms. Kern’s only vision is through the corner of her left eye, and Mr. Lindquist was born with a condition that limits his sight. Mr. Fay is their sighted guide, there to spot boats, help board, and dock. He is not their captain. Ms. Kern has sailed for 15 years, and Mr. Lindquist for almost 40. They both learned through the same Saturday morning program that brought them to the water that day: SailBlind.

Founded in 1979, SailBlind was the first structured program in the United States for blind sailors. It’s run by the Carroll Center for the Blind, a vision rehabilitation center in nearby Newton, Massachusetts. SailBlind continues the center’s mission to empower people with vision loss by helping hundreds onto the water.

At first, the program attracted curious participants – mostly from New England – who never thought they could sail. It has since spawned crews that race in regattas from Auckland, New Zealand, to Newport, Rhode Island. As the birthplace of the association Blind Sailing International and the training ground for some of the sport’s best, SailBlind put blind sailing on the map – or more appropriately, the chart.

SailBlind began with Arthur O’Neill, a former employee of the Carroll Center and a sailor himself, who wanted to help blind people enjoy the outdoors. He started a package of programs – skiing, hiking, canoeing, biking, and sailing – adapted to allow for a lack of sight.

Mr. O’Neill says the Carroll Center partnered with the nonprofit Courageous Sailing, because the latter’s founder had learned how to sail blindfolded from his father, and was the only person receptive to the idea.

Read the full story about SailBlind at article source here.