As Carol Begay Green’s index finger moved along the Navajo braille code she developed, she read aloud a story about a boy and his monkey.

Green, a teacher of the blind and visually impaired for the Farmington Municipal School District, has developed a braille code for the Navajo language.

Braille is a system of raised dots that enables people who are blind or visually impaired to read and write through touch, according to the American Foundation for the Blind.

The Navajo braille code Green developed uses English Braille – with the absence of the letters f, p, q, r, u and v – and with the addition of a prefix code for the vowels a, e, i and o. 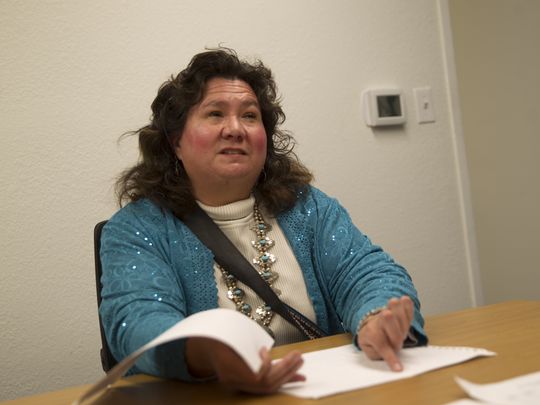 Carol Green talks about her braille system for the Navajo language, to her knowledge the only such system in existence, on Thursday in Farmington.

There is also code to instruct the reader to pronounce vowels as eight plain, high tone, plain nasal or high tone and nasal.

“The advantage of having this code for the reader is that they can distinguish and pronounce everything properly,” Green said.

Green, who is born for Tó’aheedlííníí (Water Flow Together Clan), was raised in Michigan but visited her parental grandparents in Lukachukai, Arizona.