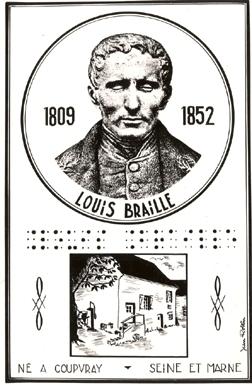 January is braille awareness month, in honor of Louis Braille, the inventor of the raised dot system of reading and writing. He was born January 4, 1809. If you were born without sight or limited vision, there is a very good chance you learned braille at an early age, and that is how you learned to read and write your way through school. For many of us who are able to read print or could access it at one point in our lives, braille is like another “language.” In fact, we may even consider it a language that individuals who are blind or visually impaired use to communicate with one another. These are misconceptions about braille that I think sometimes get in the way of learning or using braille for individuals who acquire a vision loss later in life.

The Creation of Braille

Louis Braille developed a system of raised dots that simply provided a symbol that could be felt for each character of the alphabet and punctuation symbols. At the time Louis Braille invented his system, students who were blind like him often used raised print letters. They also used embossed letters on paper to learn the alphabet and read the few books that existed in embossed print. Raised dots on paper were easier to create, both for reading and writing notes, and later for embossing books. In fact, long before braille was widely adopted, the students at the Royal Institute for Blind Youth in Paris, where Louis Braille went to school, quickly adopted his system of writing to pass notes among themselves that no one else could read!

Louis Braille’s idea for using raised dots was inspired by Charles Barbier’s more elaborate system of “Night Writing.” Barbier developed this system for French soldiers so that they would have the ability to pass written communication back and forth at night, without needing to use a light. Ironically, braille was originally inspired by raised dot writing developed for fully sighted soldiers needing to read in the dark!

Braille Is Not Another Language

While there are certain rules in braille one would not find in print and contractions that do not exist in print, it is nonetheless just an alternative set of tactile symbols for the language of the user—whether that is English, French, Spanish, or virtually any other language. Therefore, braille is not another language but more a communication or literacy tool used to access information for those with vision loss.

Previous article « Meet the 16-year-old Pianist Who’s Being Called the Next Stevie Wonder
Next article Happy birthday, Braille: how writing you can touch is still helping blind people to read and learn »