BY BETHANY ERICSON (VIA THE CHRISTIAN SCIENCE MONITOR) 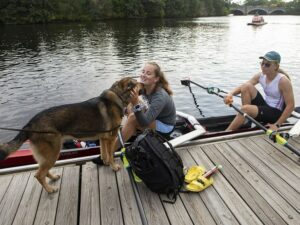 This is the pre-dawn reveille of the Charles River: coded commands shouted at scullers through megaphones by coaches steering miniature sleigh-like motorboats, or peppered with expletives from the microphones of coxswains deep in sweep boats.

Boston takes pride in its iconic rowers. These masters of balance and strength skim the river from spring thaw until the hectic boat traffic of fall that precedes the Head of the Charles, when nearly 2,000 boats race a notoriously winding 3-mile course.

Few observers are aware that some of the athletes gliding by may normally use a wheelchair, prosthesis, or guide dog to aid their movement on land.

On the water, para rowers bear less of the weight of societal assumptions about disabilities and fewer of their myriad daily living challenges. As a result, they can focus on honing the resilience needed to compete in an exceedingly difficult sport that requires both explosive power and endurance. Behind their performance on the water lies a similar combination of day-to-day strength and grit – tested by years of facing obstacles and persevering – that keeps each of them pursuing a personal best.

Community Rowing Inc. in Brighton, a neighborhood in Boston, is the largest public-access boathouse in the country and has a highly resourced, competitive para rowing program. The training offered includes a development program and the High Performance Group (HPG) for those competing to reach the national team. CRI also hosts the Paralympics National Training Camp.

Nationals and Worlds are the big competitions elite rowers face on the way up to the Olympics. It’s similar for elite rowers aiming for the Paralympics, but besides their ability level, these rowers must also prove they belong in one of several classifications of disability. The typical rowing sequence of “arms, body, legs” – a reference to how a rower moves into position to take a stroke – has a different meaning.

James Bond has Q, and CRI has Tom West, who is an engineer as well as a coach. He modifies foot plates, changes seat shapes and oar grips, and makes boats and ergometers (rowing machines) work better for individual athletes. Thanks to his inventions and adjustments, rowers can develop their natural assets despite their physical limitations.

Many coaches say, “If rowing hurts, you know you’re doing it right!” But Mr. West points out that “a lot of para athletes are used to being in pain from the equipment not working for them.”

Then he grins, adding, “I want them to be in the right kind of pain.”

Their athletes also have access to personalized attention from numerous other coaches, physical therapists, and sports psychologists, for a mind-body support team offering a holistic approach to training.

Jennifer Fitz-Roy is one of CRI’s elite-level athletes in the HPG. She was born with severe limitations to the use of her lower body, and after a lifetime of surgeries rows with her arms and trunk only. She transfers to the boat from a wheelchair and uses footplates designed by Mr. West to balance her uneven legs.

Ms. Fitz-Roy grew up on the tree-lined streets of a small town in New Jersey. Her parents and grandparents were involved and supportive, taking turns driving her three hours to specialized doctors at The Johns Hopkins Hospital in Baltimore.

With using a wheelchair, being one of the few Black students in school, and having her family engaged in a prolonged struggle to get the high school to comply with the Americans with Disabilities Act, the teenage Jennifer felt overly conspicuous.

Eventually the school installed an elevator that enabled her to go between floors without having to wait for a mandated escort, exit the building, and wheel up a steep hill. It also raised her up in other lasting ways. “All of [my parents’] actions demonstrated to me that I am worthy and I deserve equal access,” she says.

Ms. Fitz-Roy’s dad died before she graduated from high school. She moved on to Boston College, braved traveling and speaking at conferences, and explored various adaptive sports outings. “This was all way out of my comfort zone, requiring a lot of creative adaptation,” she says. “But you know, I got addicted to that feeling.”

When Ms. Fitz-Roy found CRI, she realized rowing was a sport she could participate in regularly, not just on weekends. She joined the program in winter, using a fixed seat on an ergometer to train. Soon after, she won her race at the biggest indoor rowing competition in the U.S. It felt amazing.

Rowing on the water presented a different challenge, though. She was strong, but she had a hard time finding her balance. As a new athlete, she was also unprepared mentally for the commitment and motivation needed to put up with that level of difficulty and discomfort. So she quit.

Around this time, one of Ms. Fitz-Roy’s surgeries resulted in chronic pain – and a dependence on prescription painkillers. Then, while she was visiting home, her mom died.

Off the water, Ms. Fitz-Roy began to sink, as her addiction to facing the unknown was replaced by an urge to retreat from her pain and depression.

It took a few years, but Ms. Fitz-Roy came up for air – and managed the daunting double-challenge of finding wheelchair-accessible treatment programs and detoxing.

“I was speaking with a counselor, and I thought about the last time I felt empowered, connected, and happy. That’s how I came back to CRI,” she explains.

Ms. Fitz-Roy was soon back afloat and rowing so well that she was invited to join the HPG. She began with assistive pontoons on her boat and a bad case of imposter syndrome.

There are few steppingstone competitions to prepare high-level para rowers for the stress of races like the national team trials. Yet in 2019, even though she knew she was unlikely to win, Ms. Fitz-Roy needed the experience. She lost by more than a minute.

“Those are the ones that make you,” says Ellen Mizner, USRowing’s paralympic high performance director. She points out that while para rowers have skills from dealing with disabilities, they still must develop toughness as athletes. “You have to see a big loss as information. If you stay home on the couch, you have no idea how far off standard you are. Once you know, you can keep going … or make changes.”

Then the pandemic interrupted her progress, bringing stress and isolation. The constant wait-and-see status, or outright cancellation, of most major rowing events was brutal for athletes in training.

With the isolation, her plans to train abroad canceled, and the loss of her grandmother, Ms. Fitz-Roy faced another mental health crisis. She fell hard, but it was short term. She had strong support from her rowing family to help her bounce back.

“Rowing saved her life,” Ms. Noll, the HPG coach, says of this rebound. “She wants this badly, so she was willing to make the changes she had to in order to come back and row.”

In 2021, Ms. Fitz-Roy rowed in the same race she had lost two years earlier, facing the same competitor. She was ahead until the last 150 meters, the spectators holding their breath watching the boats race bow-ball to bow-ball. She lost by a mere second and a half. Ms. Noll says that race has been called the “single best para race in the U.S., ever.”

Pearl Outlaw is a fellow rower in the HPG whose identity and resilience as an athlete came earlier, but whose identity as a person with a disability developed over many years. When she was told at 9 years old that she was going to go progressively blind, for her it just meant her doctor’s appointments got filled with super boring conversations.

Ms. Outlaw grew up in Virginia. As a child she thought, “There were people who could see, people who needed glasses, and people in pitch blackness.” She had no idea how to explain that she could see, but not always. So, she just pretended she didn’t have a problem.

As her vision deteriorated throughout middle and high school, several experiences – losing her way in a cave, failing to navigate school dances, running hard-to-discern trails in cross-country team relays – alerted her to what was coming.

“After the third or fourth time I fell down the stairs at school, I had to start using a cane,” she laughs. “I felt like I was wearing a sandwich board that said, “Look at me, I’m blind!”

A teacher mentioned learning to row at a community boathouse. Ms. Outlaw was intrigued, and soon she was getting up at dawn to learn. She talked her way onto a local high school crew team (not her own) where she could practice. Eventually she joined the team at Ithaca College, where their warm welcome eased her transition to a new environment, with new people to trust.

At Ithaca, Ms. Outlaw used a headlamp to see the person in front of her, and ridges were added to the edges of the dock. She was already a strong rower, but her coach pushed her to use all her abilities, moving her from the stern, where she could employ her strength but faced no one, to the bow where she could learn to hear the boat.

“Soon I could listen to everything: the click of an oarlock, the blades hitting the water, the wheels on the seat, the sound of blades coming out, squaring, and feathering. I heard the overall rhythm of the boat. Then there is the feeling of how everyone feels in front of you, the pickup of the boat, its weight in the water, and its movement under you. If you practice, you can just feel how everyone is moving.”

She began rowing at CRI in the summer, invited by Ms. Mizner, from USRowing, to join the development program for the Para National Team. Ms. Outlaw also experienced the unique kinship of high-level para rowers that summer.

By her junior year, Ms. Outlaw experienced her vision decrease so rapidly that it became hard to keep up with school while learning to use assistive technology. She took a break from college to spend time at The Carroll Center for the Blind in Newton, Massachusetts…

Read the full story about finding resilience to upend notions of ability here.

Previous article « User Tester Training Program to Empower Next Generation of Blind Accessibility Professionals
Next article The Plan for Special Needs Trusts Podcast: Overcoming Obstacles at the Carroll Center for the Blind with Greg Donnelly »