Blind People Can Struggle to Understand Memes, So They Made Their Own

| Screen-reading software allows visually impaired people to use the internet, but it hits a wall when it comes to memes. |

In January, a photo of a woman holding a probing cane and looking at a phone went viral on Facebook after the poster implied that the subject was faking blindness given that she was clearly able to see her phone screen. Though the image was shared thousands of times by people who believed the joke, commenters were eventually informed of the reality, which is that blind people and people with low vision depend on their phones just as much as anyone else.

Accessibility features can magnify a screen or verbally describe what’s happening on it; speech and modified tap commands make it possible to navigate software and websites without seeing them. A slew of apps for blind people make use of the smartphone’s camera to help with tasks like counting money and identifying colors, and they can even outsource a pair of eyes from a sighted individual. Specialized Braille and large-print keyboards and screen-reading software mean that low vision isn’t an obstacle to going online.

There is, however, an aspect of internet culture that blind people do have trouble grasping: memes. 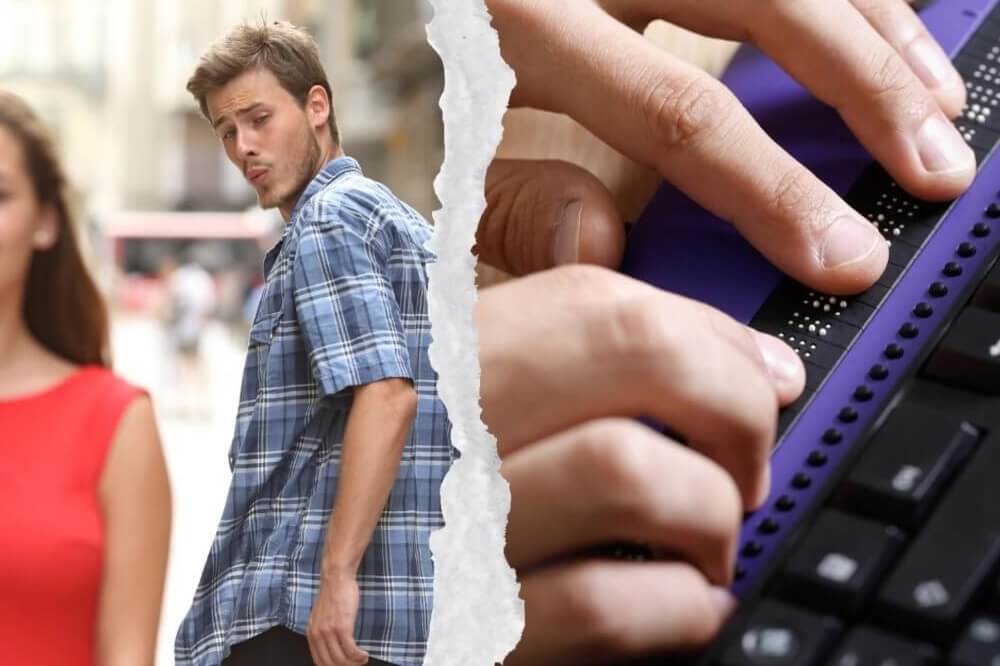 Two images mashed together. The image on the left is from a meme featuring a man whistling while turning around to look at a woman passing by. The image on the right features hands typing on a refreshable braille keyboard. Photo illustration by Lia Kantrowitz from stock photos via Getty and Shutterstock

Since the days of image macros—those pictures stamped with a simple joke caption—memes have become a universal way of communicating online. Even the president tweets them. But as the medium has progressed into Dada-esque art, it’s become increasingly difficult to convey the jokes they contain to those not already steeped in web culture. If you’ve ever tried describing a meme to your friend who hasn’t seen it, you know how hard it is (and how dumb it can make you sound). Now imagine describing a meme to someone who can’t see it, period.

Previous article « What Types of Digital Accessibility Clients Does The Carroll Center for the Blind Work With?
Next article The Coming Web Crack-Up »